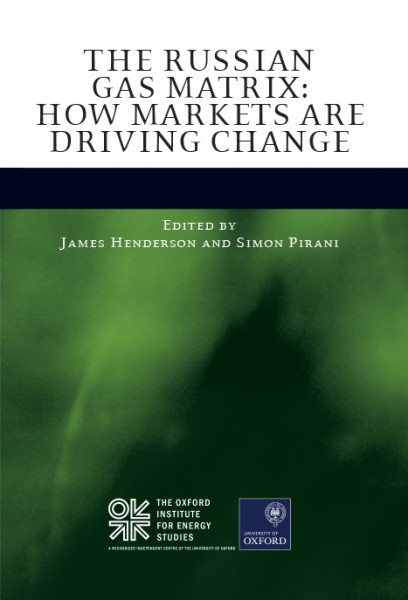 The Russian Gas Matrix – How Markets Are Driving Change

The dramatic changes in international natural gas markets since the 2008 economic crisis have impacted powerfully on Russia, one of the largest gas producers and consumers. Gazprom, Russia’s dominant gas company, faces the challenge of new pricing trends and new regulatory regimes in Europe, its main export market; increased competition in Russia itself; far-reaching change in CIS markets; and a long, difficult path to the Asian export market that it hopes to open up. Choices made about the gas industry’s future – on export strategy, domestic market reform, and models of upstream development and taxation – matter for the future not only of Russia as an energy supplier, but also of its economy and population. Gas therefore remains a political priority, and government action will be decisive. In this book, the issues are comprehensively analysed by a group of established specialists, all authors of previous books and articles on Russian gas issues.

James Henderson has been analysing the Russian oil and gas industry for more than 20 years, including as Head of Equity Research at Renaissance Capital in Moscow (1997-99), Head of Russia at Lambert Energy Advisory (2002-10), and currently as Senior Research Fellow at the Oxford Institute for Energy Studies (OIES).

Simon Pirani is Senior Research Fellow at the OIES, on the Natural Gas Research Programme. Before joining the Institute in 2007 he wrote about Russian and Ukrainian political, economic and energy issues as a journalist and historian. He is editor of Russian and CIS Gas Markets and their Impact on Europe (OUP, 2009).

Tatiana Mitrova is Head of the Oil and Gas Department at the Energy Research Institute of the Russian Academy of Sciences. She joined the Institute in 1998 and is a recognised commentator on Russian energy issues. She also teaches at the Gubkin Oil and Gas University and the Higher School of Economics in Moscow.

Jonathan Stern has been writing about Soviet, and then Russian, gas issues, for more than 30 years, and is the author of The Future of Russian Gas and Gazprom (OUP, 2005) among other publications. He founded the OIES Natural Gas Research Programme in 2003 and is now its Chairman and a Senior Research Fellow. Since 2011 he has been the EU speaker for the EU-Russia Gas Advisory Council.

Katja Yafimava is Senior Research Fellow on the OIES Natural Gas Research Programme and an expert at the EU-Russia Gas Advisory Council. She is the author of The Transit Dimension of EU Energy Security: Russian gas transit across Ukraine, Belarus, and Moldova (OUP, 2011).

Part 1: Political Economy of Russian Gas
1.    The political and economic importance of gas in Russia (Tatiana Mitrova)
2.    The matrix: an introduction and analytical framework for the Russian gas sector (Jonathan Stern)