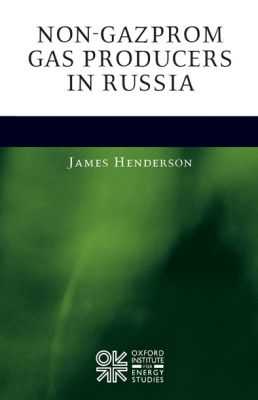 A monograph recently published by the Natural Gas Programme at the Oxford Institute for Energy Studies highlights the enormous gas production potential from companies other than Gazprom. The study by James Henderson shows that these companies have the potential to triple their production from the current level of 120 Bcm/year to more than 350 Bcm/year by 2025. Moreover, most of this production can be brought to market at substantially lower cost than Gazprom’s new field developments on the Yamal Peninsula. The Russian government and regulatory authorities have recognised the importance of providing incentives for non-Gazprom producers and have begun to actively promote production from their fields. This relates not only to gas produced in association with oil, a large part of which was previously flared, but also non-associated gas.

Non-Gazprom producers can be divided into three major groups:

James Henderson has been analysing the Russian oil and gas industry for the past 15 years. Having been Head of Energy for Wood Mackenzie Consultants in the mid-1990s he moved to Moscow as Head of Oil & Gas Research for Renaissance Capital in 1997 and in 1999 became Head of Equity Research. He returned to the UK in 2002 and is currently Head of Russia for Lambert Energy Advisory in London as well as a Senior Visiting Research Fellow at OIES. He completed his doctoral thesis on partnership in the Russian oil and gas industry at the University of London and received his PhD in 2010.